Ok guys, so I left off yesterday after dog sledding, which was the most awesome experience we’ve ever had. Now I’m going to attempt to fit the rest of the trip into one other post. Wish me luck. (<— I failed so hard at this)

Norway: the next day. Remember how I said we were exhausted? Yeah, well that translated into “so sore I think I might die,” the next morning. However, we had reservations to go snowmobiling and time waits for no (wo)man, so up we got. After eating a super special Norwegian waffle (it’s a thing!) we packed off into another bus and rode an hour and a half to Lyngsfjord, where the weather is supposedly more stable, or something.

The plans for the day called for a morning of snowmobiling, a delicious, traditional Sami lunch in a a traditional Sami tent (do you see a trend here?), several hours of a camp stay, where we were invited to wander around while waiting for nightfall, and then a 2 KM HIKE THROUGH THE VALLEYS OF SNOW IN SEARCH OF THE PERFECT SPOT FROM WHICH TO VIEW THE AURORA LIGHTS. Cool, right? 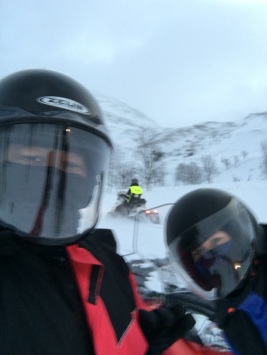 In the midst of my bitching

Well, I’m going to tell you straight off- after the day before, this trip was decidedly more…pedestrian. Think more “gang of tourists crashing their snowmobiles” than “race through the outback on a motorized sled.” Since we were riding two to a snowmobile, I let David go first. He just looked so darn excited. For those of you who haven’t ridden one before, I’m going to tell you, it’s a lot like a motorcycle, except if your motorcycle had tank treads and also no power steering and you were buried in snow. Very…unique. And cold! The gear they gave us at this camp was nowhere near sufficient to keep us warm, especially as we got up to speeds around 40mph.

Much like the day before, the trails we were attempting to plough through were nigh invisible, and this led for some hilariously awful incidents. I’m not ashamed to admit that David and I were the first to *almost* fall over. As in, the whole thing started tipping and we went waist deep into the snow before heaving ourselves back over and righting the dang thing. No one else was so lucky. Every time someone tipped over, the whole group had to stop and wait for the instructor to go pick them back up. Very thrilling.

Well, we finally got to the top of the mountain and I was in full on bitch-mode. I was cold, I was pissed off, and most of all, I didn’t want to take control of the stupid snowmobile. David, the calming and rational fellow that he is, finally convinced me to, and I’m glad he did. It ended up being fun, or *whatever*, and I had a blast flying down the mountain at full speed.

After we returned to base camp, we were invited to warm up with some tea and reindeer stew (probably the ones I saw running away yesterday) before settling in to our own private cabin for the next 6 hours. They gave us some Norwegian board games (????), a few candles, and headlamps in case we needed to go to the bathroom (across camp). Aaaand then we sat. And sat. And waited. And sat.

Now let me just pause here and tell you guys that I booked this thing specifically because it included hiking. Like, who wouldn’t want to haul their carcasses through the wilderness in an effort to find the most *perfect* place for the lights? So original. So unique.

Well, it turns out that the hike involved leaving our tent and then standing about…I don’t know…5 steps away? It turned out, our guide gleefully told us, that the light activity was so strong there was no need to go hiking! Yay! 😦

So I’m going to admit this right now. We didn’t bring a professional camera. Scorn me all you want, it’s fine, but I thought it would be really awesome to just sit back and watch the lights play out across the sky. Not so, my friends. Not so. Our guide didn’t think so either, and his interest in us disappeared entirely once he realized we didn’t have a camera/tripod setup. Instead, he focused his attentions entirely upon the rest of our group, 9 single Italian women who needed *extra* attention and guidance. Seriously guys, this dude was a sleaze. When one of the women asked if he needed help with anything, he replied “yeah, I need you to stand there and look pretty….ok thanks.”

You should have seen her face.

After finishing with the lights, we went into another Sami tent for another traditional Sami meal. This time, it was fish stew, which I only found out after biting into the meat and immediately spitting back out. I’m so classy. I told our guide (I purposefully forgot his name because he was the worst) that I didn’t eat fish. He told me that was too bad and to enjoy my bread. But then guess what guys? Guess who else didn’t eat fish? One of the pretty Italian ladies! So of course he dashed out to fetch her alternate food. I guess he had a spare hand or something since he begrudgingly brought me a bowl of tomato soup. Such thoughtfulness.

Anyway, by the end of the night I was fed up with it and just wanted to leave. The lights were great- and we got some awesome pictures, despite only using our camera phones. 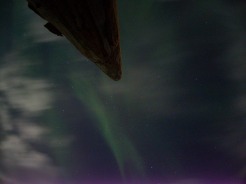 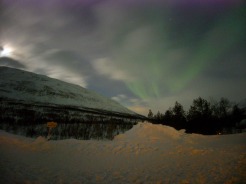 The snowmobiling was fun too, but overall, the day was just too long, and jerkface guide man really put a damper on the experience. If we were to go back again, I’d still do these awesome things, but tourism companies are a dime a dozen in Tromsø, so I’d definitely pick a different one. I’ll sum up the day with his Facebook quote about the evening, “9th of December in Camp Tamok. Great night with alot of Italian passion.”