Well, my friends, let me educate you. I am celebrating particularly hard today, because I finally managed to finagle the Southwest Companion Pass for myself and David. I first learned about this thing almost a year ago, and I’ve been dancing with anticipation for 2017 to come, because qualifying for the pass (in January of the current year) quite literally means 2 (almost) years of buy one get one free travel for you and your luckiest friend. 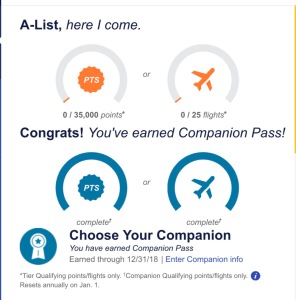 And I’ve finally done it! I’ve designated David as my companion, (for obvious reasons) and from now until 31 December 2018, whenever I fly Southwest, he is able to accompany me for free. No matter what the ticket. Southwest’s route map is extensive, and they’ve recently added new international travel too! Can you say Cancun?

So how do you get this pass? There are a few different methods:

Which one do you guys think I did? (Though I used a different one than the one I’m about to detail below, a great loophole that Southwest is finally closing up.)

It’s actually quite simple. Southwest has three separate credit cards that they offer through Chase bank. Each credit card has a bonus attached to it, which qualifies as mileage through Southwest Airlines in order to earn the pass.

The first, called the Southwest Rapid Rewards Plus credit card, currently has a sign-up bonus of 50,000 points.

The second card is Southwest’s business version of the rapid rewards card, called the Southwest Rapid Rewards Premier Business credit card, is earning a 60,000 point sign up bonus. This is a limited time offer, so signing up now is the best idea if you want to get these points. (It goes back down to 50,000 points)

If you guys are concerned about getting a business card, see my post from yesterday. It’s cool, seriously. Anyway, that card will net you 63,000 points after meeting $3,000 worth of spend in the first three months.

The third card you can apply for is called the Southwest Rapid Reward Premier credit card, and will also offer you 50,000 points after $2,000 in spend in the first 3 months.

I would personally go for the first two cards outlined above, simply because the Plus card has a $69 annual fee, whereas the Premier card (both of these are personal cards) has a $99 annual fee, and you earn the same 50,000 point bonus for either.

So, after getting two cards (if you get one business and one personal), you’ll have earned 115,000 points, (including the points you’ll earn from meeting the minimum spend requirements) which will qualify you for the Companion Pass! How easy is that? Do you have someone you like/want to travel with? Then get this pass! It’s the holy grail of travel rewards and is so easily achievable right now, there’s no excuse not to!

Keep in mind that you should have good credit before attempting this (or any reward travel, for that matter). Otherwise, it’s free game! Have fun!

-Carissa and her Companion David

One thought on “The Southwest Companion Pass: The Holy Grail of Reward Travel”