It’s time for another installment of weekly inspiration! Now, I know my travel style is probably a little bit different than a lot of you- that is, I have apparently unlimited free time and go wherever whenever (not totally true, to be fair). However, I realize most of you have productive, working, lives, and some fairly limited time off. Thus, I’m working on making real, sensible, recommendations for you all.

How thoughtful of me! (Sorry, I’ll try to be less sarcastic.) Anyway, this week’s focus is Paris, the city of love. Voted the most romantic city in Europe, Paris is jam-packed with famous landmarks and tons of things to do. I know Paris tops the list for many of us, so let’s figure out how to get there for free- or at least really cheap, eh?

Now, there are tons of ways to get to Europe. In case you guys haven’t been keeping up this last year, airlines are going full-warfare on flight prices, which means we’re seeing some incredibly low prices: 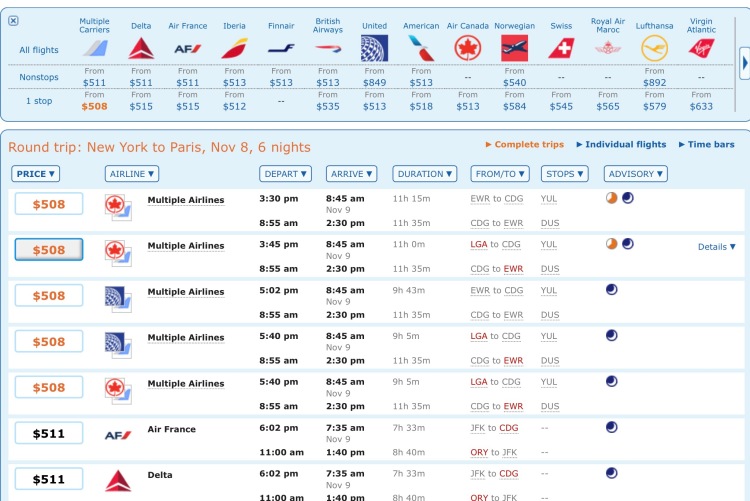 A quick look at November shows us that several different carriers are willing to sell us tickets from New York-Paris for a total of $511 per person. That’s ridiculously cheap all by itself, but we want it free.

So! The American Express Business Platinum is currently offering a sign-up bonus of 75,000 points. One of its perks is a 50% refund on points you spend for airfare on an airline of your choosing. That means, looking above, that you can choose Delta, Air France, Iberia, Finnair, or British Airways, and pay a total of 25,600 points per ticket. That means you’ll be able to enjoy three roundtrip tickets to Paris with just one sign-up bonus!

Now, the American Express Business Platinum spend threshold is pretty high (10k for 50,000 points, and 10k for and additional 25k), so if you’re not looking for a heavy investment, that could be problematic.

In that case, I would recommend the British Airways Visa Signature from Chase, which will give you 50,000 points after spending just 3k in the first three months. (Or even up to 100,000 points if you put enough spend on it).

Using British Airways Avios, you can then fly New York-Dublin for a mere 26,000 points + fuel surcharges roundtrip. (After meeting your spend goal, you’ll have 53k points).

From Dublin, flights to Paris are cheap. Airlines such as Ryanair can get you there for around $20 bucks, or, flying a nicer carrier will cost you around $100 roundtrip. Not bad, not bad at all.

So you’ve managed to make your way all the way to Paris, now what?

You could spend two nights at the Park Hyatt Paris-Vendôme, which is one of the best hotels in Paris, using the two reward nights earned with your Chase Hyatt Visa:

Or, you can transfer points from one of your Chase Ultimate Rewards cards (such as the Sapphire Preferred or Reserve, which each have a 50,000 point sign up bonus after 4k spend in 3 months), and snag 3 nights at the Hyatt Regency Paris Étoile, which costs a mere 15,000 points a night, or over 1,000 Euros for your three night stint.

If you get both cards, you’ll have enough points for a full week at the Hyatt Regency, saving yourself 2,200 Euros. 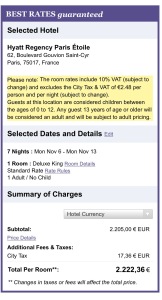 But Carissa, you say, this all seems like a lot of work. And you’re right, Paris is a notoriously expensive city, and hotels there cost more than almost any else in the world. So what if you don’t want to sign up for a couple different cards just for your hotels?

Well, my friends, I give you Airbnb. No, Airbnb is not free. And you won’t even use points for it. (Or at least not most traditional points). But it is dirt cheap, and cards that give you bonuses based on travel purchases (Chase Sapphire Reserve, Chase Sapphire Preferred, Citi Prestige, and a whole host of others) will give you the reward bonus for booking with Airbnb. Check out some of these rates for a stay in November:

So if you ever wanted to stay in a chic Parisian apartment for really cheap, Airbnb is going to be your best friend. In fact, it’s what I used during my trip to Paris last year, and I find that it really has outsized value in such an outrageously expensive city. 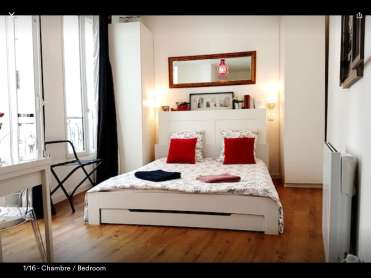 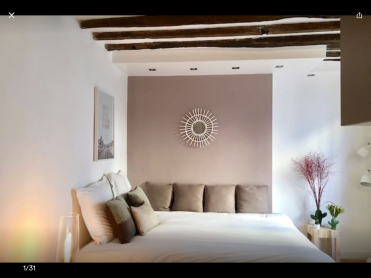 Now, if you really don’t want to pay for the Airbnb, you can get yourself the Barclaycard Arrival Plus World Elite MasterCard, which gives you a sign-up bonus of 50,000 points (after 3k spend in 3 months). These points can be used to erase charges off your card, so your stay above there would cost 39,200 points, and you’d still have some left over for other fun stuff. (Souvenirs!)

Ok! I know this has been a lot of information in a short post, but I’m hoping I got it all out there pretty clearly. Paris doesn’t have to be unaffordable if you know how to play your cards right, and saving money on airfare and hotels leaves room in the budget for other fun stuff, like shows and ridiculously fancy dinners.

I hope you liked this post! Let me know if there’s somewhere you guys would like me to write about!

2 thoughts on “Weekly Inspiration: Paris on Points and Miles”