Our final day in Baku dawned bright and not-very-early-because-it-was-vacation. We had a tour of the Old City to do, but otherwise the day was ours, and we had a blast.

But first, I just need you to take a look at the donut wall available in the executive lounge.

How am I supposed to not eat that?

Anyway, I liked this tour guide a lot better than the other, and we ended up spending an extra couple of hours after the tour together, grabbing lunch, trying pomegranate wine, and convincing him to show us where to actually buy it. (You better believe I was bringing some home. That stuff is delicious).

The guide was pretty new, so the “guiding” ended up with him mostly walking around with us through the old city, showing us the old palace and reading off the same plaques we were looking at. That’s ok though.

We finished up fairly early (like 3ish?), so had plenty more time to explore. The guide had suggested we head to the funicular, which went up past the city and gave some pretty incredible views.

Once at the top, there were tons of people taking tons of photos. And I like a good selfie as much as the next guy, you know? That’s cool. But there was this one guy.

His recently bleached tracksuit glinted in the setting sunlight as he held his selfie stick in front of himself- lips pursed, cooing for the camera as he tilted his head left, then right, his oiled locks just brushing his popped collar and his free hand coming down to rest, ever so gently, on his crotch.

I am not making this up.

He was there the entirety of the time we spent there, conducting his own personal modeling session, even asking Harrison to man the camera as he turned, making sure his butt was peeking out cutely in front of the magnificent background from which he posed.

He didn’t speak much English, which was good, because my lord was I talking some shit.

I then held my own modeling event, which was…mildly less successful. 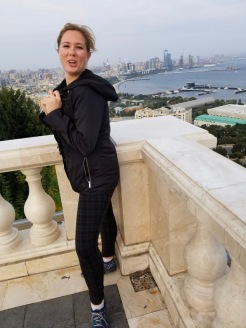 We had a ton of fun, being silly and walking around up top, even managing to sneak into the Flame Towers, one of which houses the Fairmont Hotel.

I managed this by arrogantly walking inside and demanding to know where the bathroom was. Obviously, only a guest would do something so outrageous.

Yes, it was beautiful.

We then finished up the evening by returning to Marivanna, spending hours eating as much as humanly possible.

Baku was an excellent trip. It’s dirt cheap and different, full of Russian (and Arab!) influence with less possibility of being kidnapped. (Probably).

I highly recommend it.