I’ve brought this up once or twice, I know, but this issue stands at the forefront of my mind. The Palestinian-Israeli conflict is something I keep coming face to face with, and I’m constantly struggling with my own thoughts about it. Who’s right? Who’s wrong?

But since this topic happens to be one that particularly interests me, I’ve tried to make the most out of the time I’ve been spending in the Middle East. What does this mean? I want to learn both sides, see both narratives for myself and figure out just what exactly I believe.

Now, when I had planned originally on coming to Israel, I had signed up to go visit Hebron (since the Gaza Strip is closed from the Israeli side, I figured Hebron was the next best), and also arranged for a trip down to Sederot, the nearest Israeli town to the wall that seals off Gaza. Like I said, I’m trying to be the best student I can.

Unfortunately, my trip to Hebron was cancelled, due to conflict in Hebron closing down the Old City. That was truly unfortunate. Next time, I suppose.

In the meantime, I went and visited The Church of the Holy Sepulchre, snagging some decent photos and finally getting to say I’ve been there. 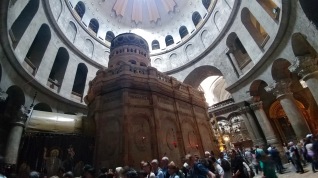 Fortunately, though, I managed to spend some awesome time in East Jerusalem, visiting the Garden Tomb (where Jesus may have been buried?)

and walking around, eventually meeting a nice Palestinian girl who inquired if I was lost (in English). I answered her, in Arabic, and we became fast friends, her taking me to lunch and then to her workplace, hanging out there before boarding a bus to…somewhere else? A church somewhere? Anyway, we walked around, walking and talking, and I had an excellent time. We were supposed to meet up again, heading to Jericho for the day, but unfortunately never got back in touch.

You all know that the best times I have are when I learn to stop saying “no” and just go with things. So it was with her, when she dragged me on the bus and out of town we went, stopping for a photo of “the best view in town.” She wasn’t wrong.

Next up, my visit to Sederot, (probably) the world’s most fortified city, and an excellent insight into certain aspects of life in the Middle East.